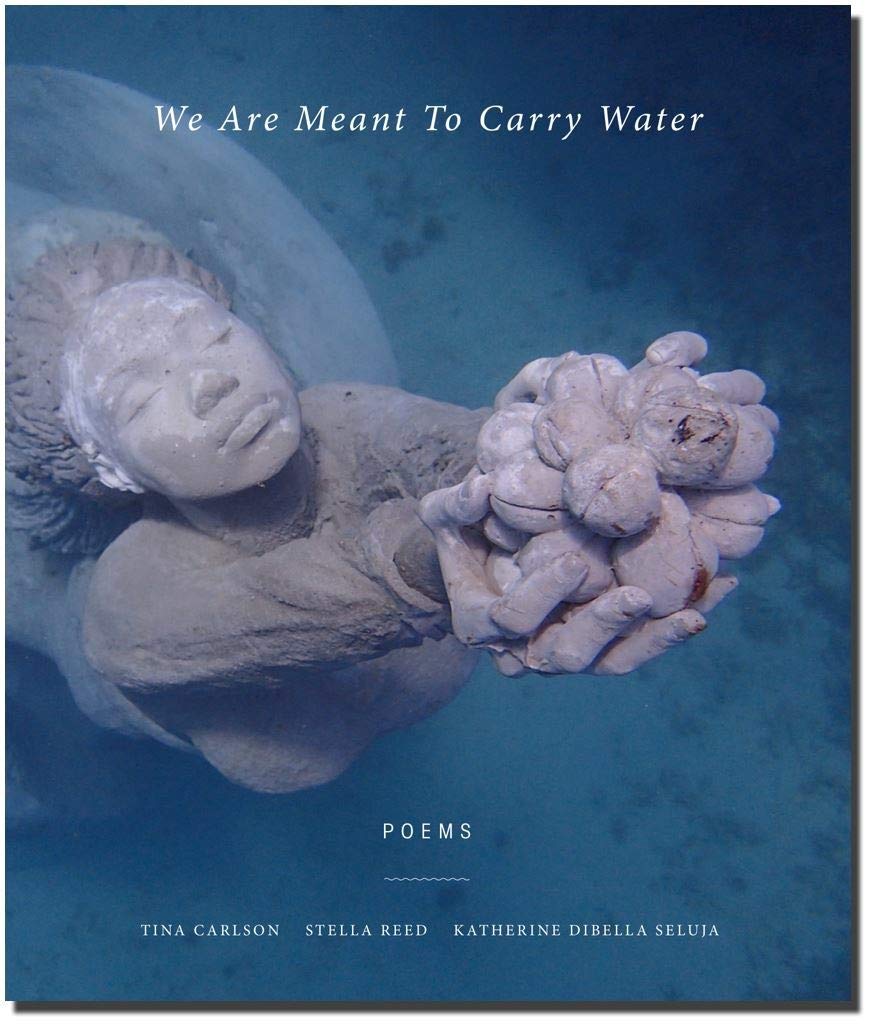 There is no way to separate a book published by 3: A Taos Press from its evocative layout. In this case, Carlson, Reed, and Dibella Seluja’s poetry collection, We Are Meant to Carry Water, takes for its cover image a sculpture by Lene Kilde, “The Nutmeg Princess,” part of The Molinere Underwater Sculpture Park near Grenada. Kilde’s sculpture depicts a young woman with her eyes closed lifting hands full of nutmeg from the blue-green depths. While the founder of the underwater park, Jason deCaires Taylor, claims it was not his intention, many see the submerged sculptures as an homage to those who died during the middle passage being brought as slaves from Africa to the Americas. The image of this underwater woman, with its twinned depiction of offering and loss, reappears three additional times in fold-out poems that are reproduced once right-side up and once upside-down. These mirrored poems rise and fall from the poets to us, from the speaker to their addressee, from the sculptor to the viewer and back again. The title of the collection itself echoes this doubling as we carry water in our cells and are first carried in the pregnant belly’s amniotic sac (“Before we are born we live / in women’s bodies…”), and also in the biblical description of an enslaved people as condemned to be “hewers of wood and drawers of water” (Joshua 9:21).

Carlson, Reed, and Dibella Seluja’s poems explore exile, loss, inheritance, and myth. We meet a migrant girl aboard a ship and follow her to her new country. We encounter and re-encounter the dark proto-Eve Lilith as well as Leda and Leda’s daughter, Helen of Troy. These latter three are powerful women whom history has often treated monstrously or as if they themselves were monsters. Each works to reclaim herself from others’ stories and to state her own truth. In “Pillow Talk: Leda & the Swan,” the speaker says: “To say I love you / is to say I want you to / be inflicted, / infected and feverish. / Is to say I want you, too.” While we do not know if Leda is speaking to herself, to Zeus, or to Helen, her child, she insists upon naming her own desire, staking claim to her body and its generative powers.

Lilith, the speaker of “Bladed with Bone & Grass,” says: “Because I had no mother / but the god who shaped me from mud // I am hard as the spike / the fault line / the cliffed fall of the mob / into rivers.” Often depicted as antlered, she appears again in the poem titled: The Migrant Girl Meets Lilith,” in which we are told: “A girl with antlers can roost with the hens, / graze with the mares, give birth to a blue foal at dawn / reach down / break her own sac.” Not only must women endure the pain of giving birth, often in terrifying or bleak conditions, but many must, literally and figuratively, birth themselves.

These poems speak intergenerationally, honoring not only mythic ancestresses, but also the grandmothers learned from and then left behind in the old country. These elders are fountains of wisdom and strength. In “Deportation,” the speaker catalogues for the migrant girl how her “grandmother / conversed with the / whispering trees, / taught [her] fire, electron, / retina, marrow.” “In Letter from Inside the Pantry,” the grandmother “slept in the larder, guarded the winter / store, battled rats with only a broom.” In “Note Stitched on Mantel Cloth,” the speaker says: “Grandmother, I cross these stitches with care, close / to what you once taught me. […] My story set here, / tangled in the last threads you gave me.” Grandmothers serve as midwives, aiding the daughters and granddaughters to give birth. “You attended so many in our village, held the labor bucket / of puke and spew,” says the speaker of “Letter to the Midwife Constantina.”

Importantly, they also teach their daughters and granddaughters to speak and sing. The power of speech is what preserves the rape survivor and the journey-scarred migrant, and aids in their recovery. In “You Are Migrant,” the speaker says of the girl in transit: “You do not understand the loud marketplace / of her language but you do recognize the sound / so like your grandmother’s voice / the last time you saw her.” In her new country, the girl must learn to “push sounds / from dual-chambered lungs.” In the poem “From Lilith to the Gods That Made Her,” Lilith demands: “Shawl me with some kind of sound.” When physical survival isn’t possible, the voice aids in the passage from life to death, as in “Lilith, I saw You on the Deck.” “What did you whisper,” the speaker asks, “as she swung / her leg over the rail. […] How many others have you shepherded this way?” The female voice may lift a song or a cry, a prayer or a curse. It may teach or it may witness.

It is fitting that the collection itself is a collaboration between three women—Carlson, Reed, and Dibella Seluja—a braiding of voices and of vision, a uniting of effort. Perhaps it takes the strength of a combined effort to confront the evils of sexual violence, exploitation, and the dislocations of history. The final poem ends with these words: “Your voice / is asylum for mine.” We women are keepers of one another’s stories. Our job is to listen for what needs to be said and empower those whose stories they are to speak their truth. If that isn’t possible, our work is to guard the words and say them ourselves so that the thread from grandmother to granddaughter to great-granddaughter, from goddess to mortal and back again, from one country to another, from one language to another, isn’t lost.

DEVON BALWIT sets her hand to the plough in Portland, Oregon, where she is learning to tend chickens and a vegetable garden. When not weeding, she teaches and writes. Her work can be found in print in The Cincinnati Review, Sugar House Review, Grist, Tampa Review, Red Earth Review, and more.

One thought on “Book Review: We Are Meant to Carry Water, by Tina Carlson, Stella Reed, and Katherine DiBella Seluja”