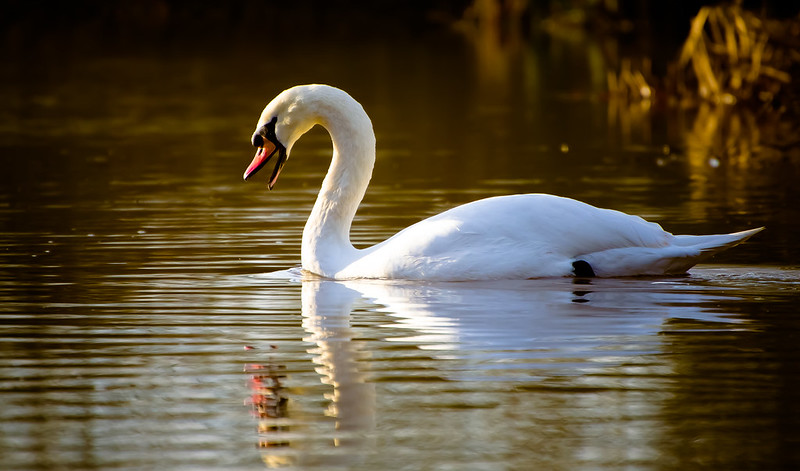 Three swans spin slowly on the water. I am seated
on the nearby patchy dirt and see
jagged mountains scratch up together.
Reachable by a coarse path.

The swans turn and one
puts its beak in the water, untethering.
Elk will arrive within a week.
Blare their parables,

lock horns with night’s pistons.
Right now the shrubs
take their facts and are silent.
An entire day and other bright ones.

I cross into measured sections: bulwark,
lake fault, displacement,
and hear only wings spool from heavy corners
when I move. Pointing, I take photos

of conclusions and the space between.
Narrow in on the beckon of swans, then out to scarp slopes.
Light and its portraits of symmetry.
If you find my body still beautiful,

the dying woman said to her daughter, you may want
to take a picture. She did.
The photo showed every leaf
of her skin. Showed her old self as a meadow

requesting warm waters. A topography.
After days photographing
this honeyland, the thousand valleys

in front of me, the ground alters its pitch.
Horseheads dance in trailers
that ruttle the road.
The sky almost knows each octave of blue.

LAUREN CAMP is the author of five books of poems, including One Hundred Hungers, which won the Dorset Prize, and Took House (Tupelo Press, 2020). Her poems have appeared in The Los Angeles Review, Pleiades, Poet Lore,World Literature Today and other journals. She has received fellowships from Black Earth Institute and The Taft-Nicholson Center, and finalist citations for the Arab American Book Award, the Housatonic Book Award, and the New Mexico-Arizona Book Award.  www.laurencamp.com

One thought on “Hiatus”