When It’s Time to Leave: Conversation 4 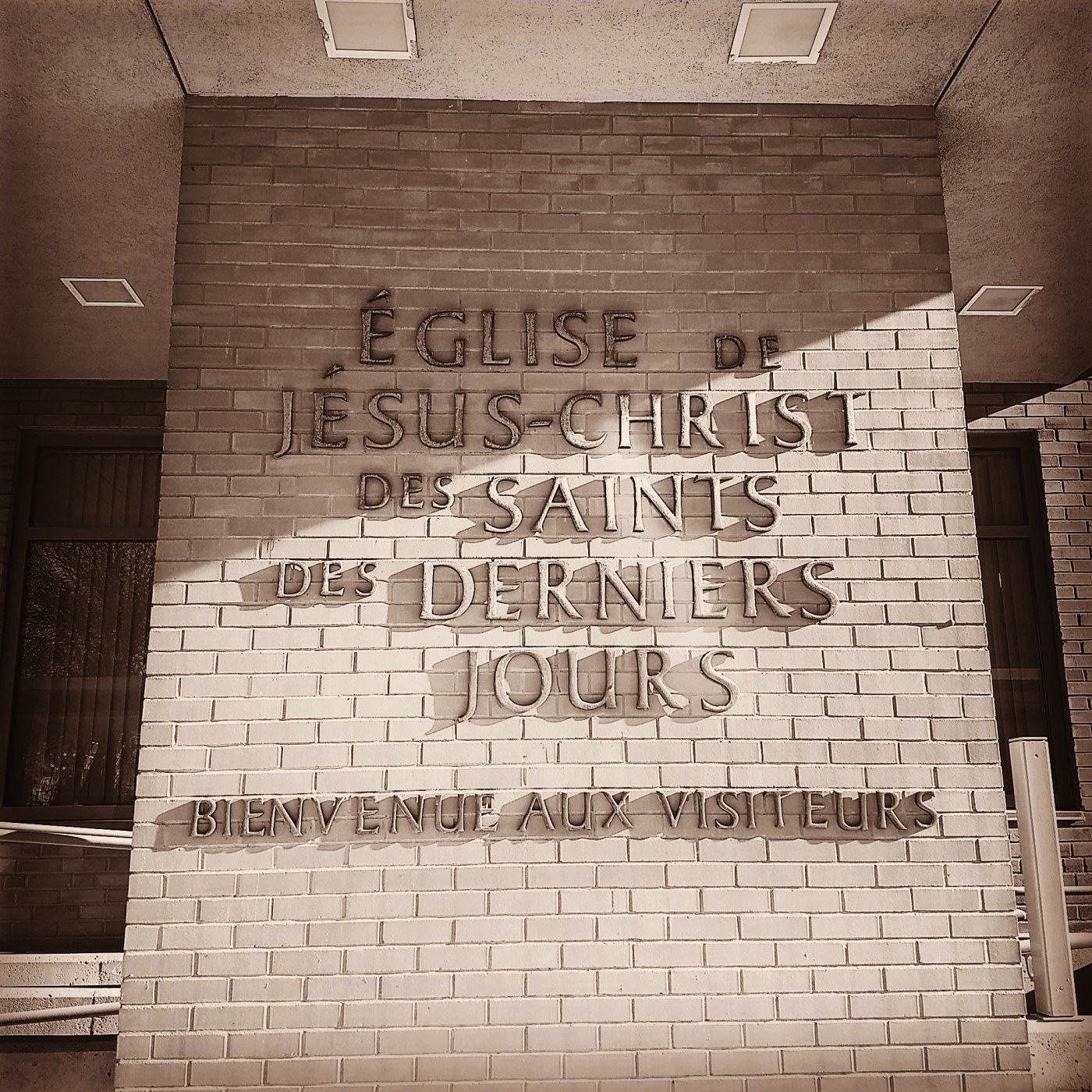 If you grow up in Idaho, you are either Mormon, or you are not. I was not. A majority of the high school I went to was.

There was no expressed tension in these situations, none that I know of anyway. Yet there was a divide, and it was palpable.

Perhaps because of this upbringing, I went through much of my adolescence thinking I understood Mormonism. I saw it up close, after all, and every day.

How could I not know something about it?

We’ll start with an anecdote firmly placed in adulthood, a thing that happened, not all that long ago, so I’ll use the present tense.

She’s at church, with her husband, with her children. The church members are discussing how the greater worldly culture is against them, mocks them for their values when it comes to homosexuality, feminism.

The congregation sees themselves a persecuted minority.

Except for her, and her husband, who only hear hand-wringing from people whose self-conception depends on seeing themselves as martyrs, even as they deploy this rhetoric against the disenfranchised, whether it be a single mother or a gay couple living down the street.

Her husband has had enough, and he says so to his wife.

They walk out the door and never come back.

After she tells me this, I wonder, at what point did I come to a similar conclusion?

I have no definitive moment, but I slipped into an awareness that the churches of my youth were not, as I had told myself for some time, teaching something misguided but harmless. Or if it was harmful, it was self-inflicted harm.

When did I see that the cultural paranoia perpetuated by such churches looked like, and almost certainly was, a protective veneer for the fact that their beliefs were pernicious, harmful, even immoral?

Did I have the courage to walk out the door the way this couple did?

We’ll go into the imperfect past tense, to guide us toward that moment the couple left.

In her late adolescence she was on a mission. Her church sends missionaries, in their late teens and early twenties, for two years, but for most of her youth this was mostly men. They offered an eighteen-month option to women; she wanted to go.

They sent her to Quebec, and at first she was disappointed. Canada? Where she’s from Canada is hardly the exotic location she was hoping for; it’s just more forested wilderness to the north that happens to use brightly colored money.

She was working with a woman who is interested in the teachings of her church. There’s a catch. The woman has fallen in love, and she has fallen in love with another woman. The missionary was barely more than a child herself, but she tries to explain the teachings of the church to the woman: the prospective convert’s greatest happiness will only be realized if she can reject this sinful behavior. Our missionary didn’t do this out of any particular judgment. She wasn’t even sure what she makes of this teaching herself, but it’s what she has been taught, what she had faith in.

After one of these sessions the woman asked her if she will listen to a lesson, in turn.

The missionary girl from the western U.S. agrees. And a little while later in a converted police station in downtown Montréal, the woman and her partner try to teach this Utah girl about unconditional love, about refraining from judgment, using verses from The Bible and The Book of Mormon.

The missionary girl had an emotional reaction that defies easy description.

How, she wondered, could this woman and her lover think that she was judging them?

During this conversation my mind reels back to a warm, spring high school night in my little Idaho town, when a friend and I sat in a fast-food franchise. We were weeks, if not days, away from graduating. He was being pressured to go on a mission. He didn’t want to go. His family, his church, it must have felt like the entire valley community we both lived in was telling him that he needed to go, that it was his spiritual duty, that to not go was to jeopardize everything about his life that he knew up until that point.

Foolishly I pitied him, thinking that my religious tradition at least afforded me free-will.

I failed to notice that I was about to go to a religious school 2,000 miles away, and the role my upbringing had played in that decision.

Her mother is gay.

Why didn’t you tell me before? The earnest Mormon woman wants to know why her own mother didn’t trust her.

Because, the mother replies, I didn’t want to disappoint you again.

Thinking of that moment back in Quebec, thinking back on a lifetime of experience in her faith: all of it comes back to her, and she sees how her faith has shaped every aspect of her relationship with her mother.

If your church has a stance on homosexuality, chances are it’s a cruel stance. Even some of the more so-called progressive churches demand soul-killing mixtures of chastity and silence, and these historical bigotries are themselves almost impossible burdens for even the most well-intentioned to overcome. These stances quietly dehumanize, even demonize. They enable hate, promote paranoia.

One day you look into the face of someone you love, and you realize that they were always gay, and it’s not an abstract concept anymore.

And like this woman I am talking to on the phone, there came a day when I felt I had to choose theology or humanity.

When you’re in the church, your social life is more or less managed: you don’t have to relate to people outside of the church. Moments not spent at work or at school or with family, those moments are scheduled: they are spent at church.

She goes through a second childhood of sorts, learning to make friends based on something besides a common faith.

She misses what the church was doing for her children, the way it provided a system of safe moral guidance.

She misses the comfort of the afterlife. The idea that this life is all that there is occasionally haunts her in the wee hours. There is, now, no heaven to look forward to.

When I left the church, it was a relief to flee even the last vestige of the concept of hell. She misses the idea of heaven, because her faith emphasized heaven. This is a small detail, but I find it a compelling difference. The afterlife was something she could look forward to.

In the churches I grew up in, we talked about heaven, yes, but always with the shadow of hell shaping the contours of our concept of heaven. Heaven was not burning in hell. You tried to bring souls to salvation, because without Jesus they were going to hell, and do you want that on your conscience? For a Mormon, even the lower levels of heaven are relatively easy to attain. For those in a Calvinist-influenced Anabaptist tradition, hell is an inevitability for so many: wide is the road that leads to destruction.

This little detail fascinates me. I was taught how oppressive her faith is, how wrong-headed, how misguided, and we heard about the intense social pressure brought to bear on all aspects of life. In this one tiny throw-away comment about the afterlife, the fact that she misses it, she emphasizes how little I understand about this faith, what it gives, and what it might have taken to leave it.

I could have had this conversation years ago, if I had been honest with myself, and if I had found someone willing to be as honest as she is. That night over fries and a Formica table in Idaho was a missed opportunity to understand, an opportunity that my friend and I were not ready to seize.

And when I fled the church, it was a blessed relief to be away from the social expectations of the churches I had grown up in, the relentless implied social judgments.

There are other realizations during this conversation. It becomes clear to me that, as vexed as her church’s attitudes towards women are—and she makes no bones about her frustrations with her former church’s recalcitrance on that issue—the Mormon church still provided a space for women to encounter and protest that treatment. The churches I belonged to were at least two, possibly three decades behind in even conceiving that kind of space of discussion, progress, movement.

She writes poetry. She earns her MFA, she edits a magazine, she finds that she is bringing a spiritual practice into being almost without realizing it, one that she has constructed around the way that poetry creates meaning on a daily basis. She raises her children.

Family members still send notes. When she visits extended family, she finds a set of scriptures casually placed on the nightstand.

She may have left the church; the church will never leave her.

My wife’s grade school was one building, but two schools: one Catholic, one Protestant. They learned separately, they played separately. Occasionally they would taunt each other across the yard, and throw snowballs at one another, and sometimes they filled the snowballs with rocks.

My schools were similarly divided, the line more invisible, but perhaps that much more pronounced for being invisible: you have to articulate, repeatedly, something that might otherwise be forgotten.

When I close the conversation with the woman, the girl, from Utah, I can only wonder why I didn’t have these conversations sooner.

But I know why: it was the line. And even if we both left the churches of our youth years ago, the lines never left us.

This is the fourth in a series of articles about faith, progressive politics, and voices of faith from unusual perspectives. Please message Nathan on Twitter at @writeronabike if you think you know of a person, a church, a mosque, a synagogue, a faith community of any creed that might be of interest.

Nathan R. Elliott grew up in Idaho, was educated in Chicagoland, worked as a professor in Georgia and Newfoundland, and now writes and lives in Montréal. He has published peer-reviewed research on the intersections of nineteenth-century British Literature and nineteenth-century science; he has published fiction and creative nonfiction in a variety of venues. He is the recipient of the 2016 NL Arts Council’s Lawrence Jackson Writers’ Award.

Nathan R. Elliott, When It's Time to Leave