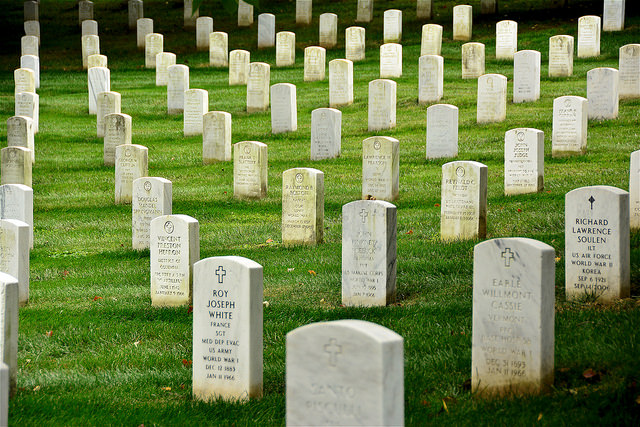 When eating an elephant, take one bite at a time.
—Creighton Williams Abrams, Jr.

I.
When I pour out my grief over the leukemia
that has seized his body, she says think elephants.

When I imagine instead my grandfather’s frail form,
curled up and growing smaller, my best friend takes my face in her hands

and says think: largest mammal on land, largest heart, take life
each day, one bite at a time, and I think Israelites and manna,

and I know I will depend on her each day to remind me to breathe
when he can’t without pain shooting through his nerves.

I think of war waging inside of him, spine through to skin,
and she thinks how elephants lay leaves over their dearly

and dead beloveds. She held me through high-school heartbreaks
and did my makeup before each dance, casting more color

over me than I ever knew, but it was the elephants that saved me,
that reminded me of God and goodness.

II.
I flew across the country to Washington D.C. and asked a man
behind a desk to find the plot number of an old World War II general

who I have never known. He hands it to me and I smile, close to tears;
I will wander the graveyard until I finally find it: the grave of the man

who has given me my mantra, the large and elegant tombstone
for someone else’s grandfather. When I find it, I fall to my knees in the grass

and let out a wail like the terrible trumpet of the elephant,
and I pray, thankful for what she has given me.

LAUREN JETER graduated with a BFA in Creative Writing and a minor in Literature at Stephen F. Austin State University in Nacogdoches, Texas. Her work has appeared in HUMID and The Blue Route, and she received SFA’s 2017 Literary Award in Poetry, as well as a nomination for the AWP Intro Journals Project. She resides with her husband in Stafford, Virginia.