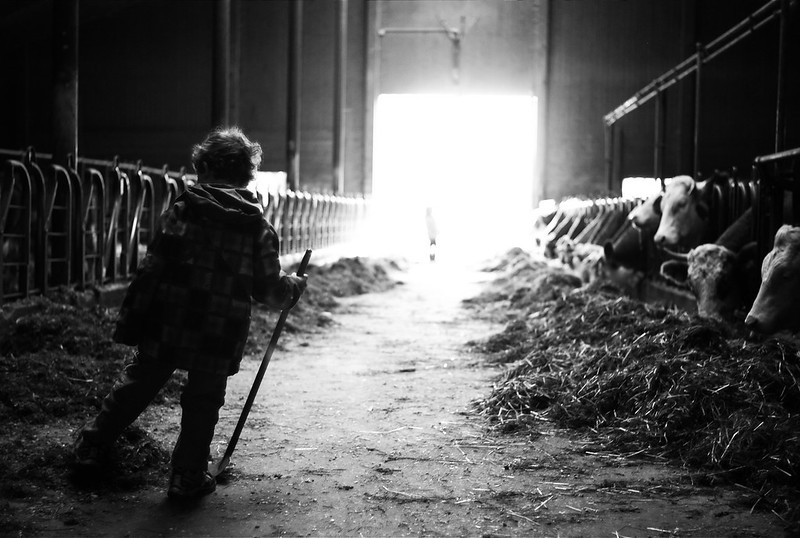 On the porch swing I sat and removed boots I would return to the bottom shelf, below gloves, brushes, and bucket, as she talked again of my inheritance, of a farm she had bought from the county with my sister’s father, who worked offshore, then, at the shipyard, until his shortness of breath.

I drank caramel stains of root beer from cracks of ice; she said, I still have chicken and dumplings in the big pot on the stove, peas in the fridge.

She knew I would feed myself, after hours of morning work, or even not. Get your plate, she said, might as well; you, the last and only son. You’ll be left everything here, just so you behave.

Through the screen, an unction of workdays, fifty-nine cent thighs, boiled and deboned, flour still gathered on the counter, at the margins of wax paper—not so different than Sunday, except the blown-up remains of a can of store-bought biscuits—but before I could fill my second, my father closed his word, laid down the red crayon he used to mark pages, perhaps from Leviticus, For it is the jubilee; it shall be holy unto you: you shall eat the increase thereof out of the field.

You don’t need no more dumplings to slow you down; let’s get back to work.

On the fender of our tractor, I rode, with my feet above a toolbox with nothing more than a crescent wrench and rags, below my father’s seat, a torn original of metal, foam, and four-inch wide swathes of duct tape.

My hands lifted high as the open rain cap on the exhaust pipe, as heat passed through my fingers and rose into a denim sky, faded against the shine of a copper rivet.

Castings of light poured on my body until I saw the silver tops of the t-posts laid between fields, then tufts of hair caught in the barbs, and when I saw soil cut under a chevron of treads, I reached to my father, so I would not strike my head against the ruts, dry, and hard as acres of diamonds.

I caught his wrist, a thin margin of cotton and flesh, and he lifted me, without a test of his strength, as the pines surrounded our pastures, the timber plots of children of cousins who dug wells through loess and clay.

Under those limbs, I could not walk.

In the gloam I left my father, as he worked on a worn universal joint, cleaned the soil from my face, laid the washcloth on the rim of the sink, and sat beneath a light.

She passed, turned, came, took me, left pages open as a peacock’s tail, whipped me on the bed they no longer shared, as the belt wrapped between my legs, until I folded, as a portrait of a godly child in prayer; she cried, Dirty rags dry behind the door, not where people see them.

Of course, this hurts me more than it hurts you.

Tears, then I rectified my sin; I hid the cloth, as she watched, took lead and pages, returned to the barn, past a toolroom where my father still worked, past troughs and stanchions of the lost dairy, past hayrack and holding yard, through crowding pen, to the chute, where the yearling steers and open heifers loaded to the trailer.

Perched on corral boards, I kept a straight back, not leaning toward the mockingbird song in the pecan trees, the muscadines draped on the trellis, or the pile of lightered that grew until all was gone, until my eldest sister sold the last knots of resin.

Fields of bahiagrass, enough to carry our herd through fall, reached to the fencerows, where one pine stood, between the farm and the neighbors, exactly on the line. Then, my father came, I closed my book, and we sat with the clusters, taking pulp from the skin, and spitting seeds to the dark.

BRENT HOUSE, a coeditor for The Gulf Stream: Poems of the Gulf Coast and a contributing editor for The Tusculum Review, is a native of Necaise, Mississippi, where he raised cattle and watermelons on his family’s farm. Slash Pine Press published his first collection, The Saw Year Prophecies, and his work has appeared in journals such as Denver Quarterly, The Journal, Third Coast and The Kenyon Review.