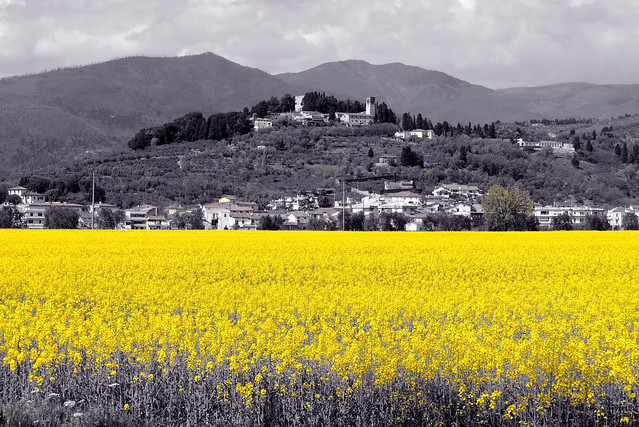 my new yellow car hits a patch of black ice
spins round 360 degrees, finds dry pavement and somehow
continues down the highway. i confess i neglected
to see the wind-scarred mesas, the dark piñon trees,
the neon 7-11 signs. but i did not miss
the now of it, the clear gift of further life.
yellow. i don’t know why i need to tell you that
but i do. it was yellow and it was the color
of understanding my mortality.

six months later i was spun around again
following motorcycle tracks laid down
in a perfect yin/yang symbol in an arroyo.
the arroyo where my best friend’s uncle
and father died. like walking a labyrinth,
thinking how their hounds had howled
and howled all afternoon before they drowned.
i finished walking the bisected circle
and found a pink rock. the same pink rock
i had meditated with for two years at my old
adobe house above the river, ten miles away.
the same pink rock that had been missing
since they died. this time i saw the wind-scarred
mesas, the dark piñon. i don’t know why the rock
was pink, but that was the now of it. the color
of not understanding mortality, of knowing
that my life would be always confessing and neglecting
the mystery. being careful with yellow.

now, 45 years later, the pink rock is on the nightstand
next to my bed. with the sacrum of an elk, an obsidian
spearpoint, a statue of a peruvian llama
with a hunchbacked rider, five nondescript rocks
from the ranch a half-continent away, each rock
a family member. i don’t know why
these things have come to me, but they have.
there is no yellow in the house, there is no bible.
and every time i think i understand
i hold the rock.
neon flashes and i am turned around
back into my breathtaking ignorance.

LUTHER ALLEN facilitates SpeakEasy, a community reading series, and is co-editor of Noisy Water.  His collection of poems, The View from Lummi Island, can be found at http://othermindpress.wordpress.com.  His work is included in the recent anthologies WA 129; Refugium, Poems for the Pacific; Poets Unite! LitFUSE @10; Weaving the Terrain;  and For Love of Orcas.  His short story, The Stilled Ring, was a finalist in the annual fiction contest at terrain.org.